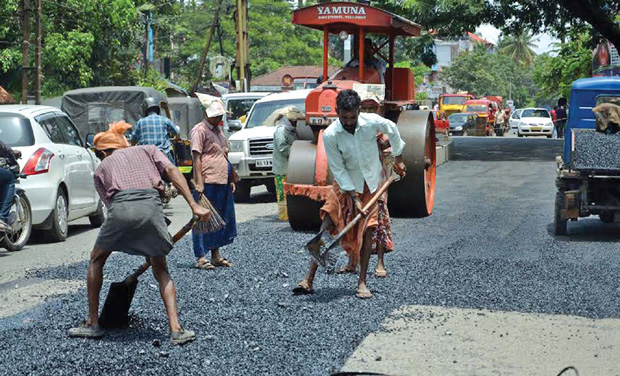 GHMC has assigned maintenance, re-carpeting and road repair works to private agencies. The state government has approved 60 to 70 km of the additional road network to the agencies under a scheme, as work is on the Extensive Road Maintenance (CRMP) programme.

This is after the time for defect liability under current contracts for the 70-km stretch of the road network. In seven packages of CRMPs, the Greater Hyderabad Municipal Corporation (GHMC) has contracted private agencies for road repairs, maintenance and repairs in 709 kilometres.

In the first year of 709 km of stretches of road, 331 km had to be re-carpeted. Most of the work was completed, but the recent heavy rains have badly damaged several stretches.

As part of the contract, GHMC senior officials said that the agencies are now carrying out the road repair work.Works over 295 km have already been completed, and balancing work is expected to be finished by the end of the month.

Sanitation is also assigned to the agencies, in addition to the marking of zebra crossings, lanes and other works, as part of the maintenance of the 331 km road network. The official said that almost Rs 400 crore had been spent on such works until now.

And the government has now allowed agencies to maintain an extra 10% of the city’s road network for around 70 km. It follows the current contract defect liability for the 70-km road networks.

On this stretch, the Agencies will conduct road repairs on a war footing because many roads have been damaged on recent heavy rain. In addition to the CRMP works, by November 30 and 272 km of CC road work by December 31 the municipal corporation will also be working on the completion of works covering 99.51 km of BT road.

Around Rs 256 crore has been spent on these road projects and 315 stretches covering 99.51 kilometres in all six areas have been identified. All the zonal commissioners and officials were instructed as of November 30 or earlier they have to complete all repair works.

In addition, temporary restoration work is underway in areas which suffered major damage from the rainfall. Actually, special teams are working for pothole filling, cross-cutting, repair work on bad patches. This is continued by daily carpeting and lying on the roads with fresh BT layers.